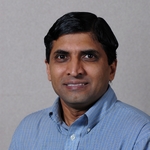 Dr. Nair’s career commitment has been mathematical analysis & design of complex systems for a variety of applications including control, using both computational modeling and experimental techniques. His interests during the past eight years have been in the area of computational neuroscience, at the molecular, cellular, network, and behavioral levels. He has developed two new graduate courses (Theoretical Neuroscience I and II) that focus on intra- and inter-cellular neuronal modeling, and include usage of NEURON and GENESIS packages. Seeded by an NSF CCLI grant, he and biology colleagues Schulz and Schul, designed and have been team-teaching once a year, an interdisciplinary undergraduate course ‘Computational Neuroscience’ starting Spring 08, with alternating biology and modeling weeks, and a theme of ‘from biology to model and back again’. Based on his experience in applying systems concepts to neuroscience, he has been leading an effort to develop computational neuroscience on campus, including an undergraduate minor in computational neuroscience. His present projects are as follows: NIH R01 grant (PI) to study modeling acquisition and extinction of conditioned fear associations in amygdala circuits; and an NSF REU site award (PI) on summer research projects in neuroscience where 12 undergraduates are recruited from around the nation to work with faculty at MU on projects in neuroscience with a computational component. His relevant past projects include the NSF curriculum development project cited above; an NSF collaborative research grant (Co-PI, with R. Cocroft, PI) on novel mechanisms of mate localization in plant-dwelling insects by integrating behavior, neurobiology, and biomechanics; modeling PFC-NAc glutamatergic pathway in cocaine (NIH subcontract from Medical Univ. of South Carolina), modeling pediatric trauma triage using hierarchical models incorporating statistical and neural network modules (Co-I on NIH R05 award with Randall Burd, MD, Ph.D. as PI), computational model for prediction thermal fatigue (PI Air Force, NASA), and NSF GK12 Fellows project (PI) Engineering Fellows in G6-9 Science Education,with eight faculty from three Colleges and three local public school systems. As PI, Dr. Nair has directed external sponsored research in excess of $5M over the past 10 years. He has a US patent for a mechatronic automation device. Dr. Nair is a two-time recipient of the departmental Outstanding Teacher Award, and also won the 2011 Outstanding Senior Teaching Faculty Award in the College. Two of his past undergraduate advisees have been African Americans whom he mentored to the Ph.D. level.