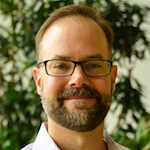 Blake Meyers is a Member & Principal Investigator at the Donald Danforth Plant Science Center in St. Louis, and he is a Professor in the Division of Plant Sciences at the University of Missouri – Columbia. He formerly held the Edward F. and Elizabeth Goodman Rosenberg professorship in the Department of Plant and Soil Sciences at the University of Delaware, where his research group was from 2002 to 2015. His research emphasizes novel approaches and applications of bioinformatics and next-generation sequencing to plant genomics, with an emphasis on understanding the biological functions and genomic impact of small RNAs, DNA methylation, and gene expression. These studies take place in maize, rice, Arabidopsis, soybean, Medicago, and other species. The Meyers lab has pioneered and co-developed a number of sequencing based applications, widely applied to study plant genomes and their RNA products, particularly small RNAs, and the lab continues to develop and apply novel informatics and experimental approaches for the analysis of RNAs and their functions, primarily in plants.